To say I was born with sawdust in my blood is an understatement. I grew up in the sleepy logging town of Hayward, Wisconsin, home of the Lumberjack World Championships.  Like many of the resident children, I started competing in log rolling at the age of five.  I competed throughout my entire childhood and turned pro as a teenager.

I won my first men’s log rolling world title in 1998, and followed it up by winning five more. In ESPN’s Great  Outdoor Games, I won a total of 14 medals, tying for the most medals ever won during the five year run of the games. In 2005 I was not only awarded an ESPY Award for best outdoor sports athlete, but was hired as a stunt double for Eugene Levy in the movie Cheaper By the Dozen 2 to log roll against actor Steve Martin.

Emotionally affected by the events of 9/11, I joined the Minnesota National Guard in 2003 as an infantryman. On December 19, 2006, while leading a convoy through Baghdad, my Humvee was struck by a roadside bomb. I lost my right arm below the elbow, and my left hand was shredded by shrapnel. I was airlifted from Iraq and arrived back in the United States at Walter reed Army Medical Center on Christmas Eve. I spent the next nine months at Walter Reed relearning basic life tasks without my dominant right hand. Despite the loss of my dominant right arm, I returned to the sport of logrolling. In 2009 I won my first men’s log rolling world title with one arm, my seventh world title overall. I went on to win three more and retired from professional lumberjack sports in 2015 with ten log rolling world titles. Not only am I the first person to ever win a log rolling world title with only one arm, but with ten titles I’m tied for the most ever in the 100+ year history of the sport.pic 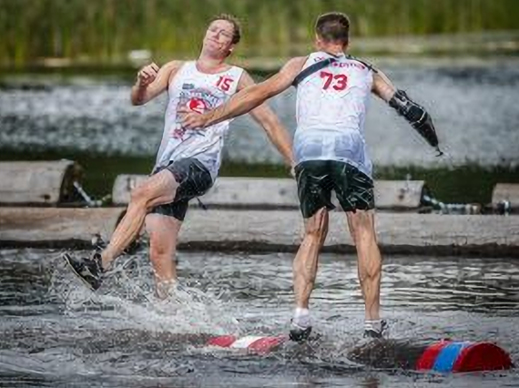 It was during my early teenage years that I was bit by the woodworking bug. I wasn’t happy with the quality of cheap, mass produced furniture that fell apart under normal use. One project led to another, and before I knew it, I was hooked. I bought my first sawmill 15 years ago to support my own woodworking addiction. Despite the loss of my right arm to a roadside bomb, I continued sawing and woodworking, and persevered to relearn my skill set with the use of only one arm. My perseverance spawned the J.R. Salzman Wood Company, your source for beautiful woodwork and custom live edge furniture.